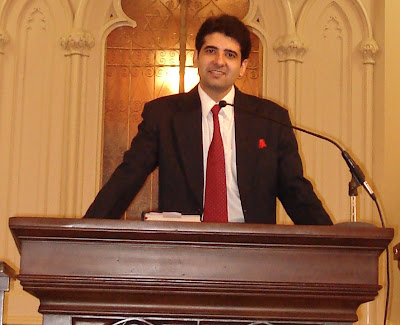 The doctoral thesis of Lucknow-based Navras Jaat Aafreedi (31), on the possible Jewish ancestry of Afridi Pathans, has become one of the most widely discussed works on lost tribes of humanity in recent times.

Aafreedi's research (The Indian Jewry and the Self-Professed 'Lost Tribes of Israel' in India, 2006) draws from ancient Persian and Jewish texts, and existing customs and beliefs of the Afridi Pathans of Malihabad (27 kms from Lucknow), to suggest they could be descendants of the Ephraim, one of the tribes driven out of northern Israel in 721 BC by Assyrians. Ten tribes were banished from Israel at that time, and as they moved and merged with larger populations they were lost to the world.

Himself an Afridi Pathan, the motivation behind Aafreedi's research study was personal and academic. "In part the study was an investigation into my own roots," says Aafreedi, an alumnus of La Martiniere Boys college and Lucknow University. It is the first anthroplogical research conducted in India and was instrumental in getting Aafreedi a post-doctoral position in the Graduate School of Historical Studies, Tel Aviv University in 2007, following the award of a scholarship from the government of Israel.

Aafreedi's thesis is that Afridi Pathans travelled with the conquering armies of Ahmad Shah Abdali and Bakhtiyar Khilji between 1202 AD and 1761 AD. To curry favour with India's non-Pathan rulers of the time, they suppressed their ethnicity and gradualy lost their cultural moorings. The study is important as the other, much larger concentration of Afridi Pathans, in Afghanistan and Pakistan (where they provide the jihadi foot soldiers of the Taliban), is inaccessible for academic enquiry.

Inevitably, given that Afridi Pathans are among the world's most militant Islamists, criticism of Aafreedi's work has come from within his own family, with his 93-year-old paternal uncle Qavi Kamal Khan accusing him of using his research to "get cheap publicity".

Beyond the family circle, research on lost tribes is also being slammed as a Zionist conspiracy to lure poor people around the world into Israel, to swell the ranks of Israeli soldiers required to sustain the Israel-Palestinian conflict. Such suspicions are fuelled by Israel's Law of Return, 1950, which gives every person of Jewish origin worldwide, rights of residence and Israeli citizenship.

Scientific validation of Aafreedi's work can come from genetic testing. Last October, Shahnaz Ali, a Research Assistant at the Central Forensic Science Laboratory, Kolkata collected blood samples from 53 paternally unrelated males from Malihabad. In May, she will begin testing the samples at the Israel Institute of Technology, Haifa, sponsored by the Israeli government.

If they indeed prove the Jewish origins of the Afridi Pathans, Aafreedi's doctoral research thesis could well catalyse a rapprochement in the war-torn Middle East.
Posted by Dr. Navras Jaat Aafreedi at 10:56 4 comments: