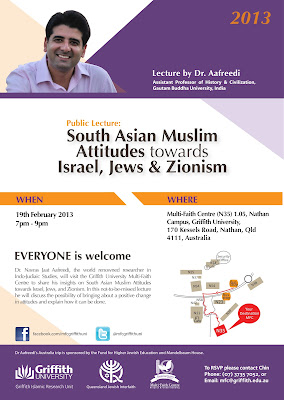 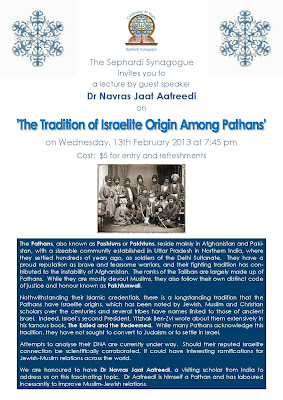 Perhaps the only Indian scholar of Indo-Judaic Studies and a Jewish-Muslim Relations Activist, Dr. Navras Jaat Aafreedi would be on a lecture tour of Australia from 9th to 24th February 2013, during which he would speak at four Australian universities in Sydney and Brisbane among many other venues on a wide variety of topics. His tour is sponsored by the Fund for Higher Jewish Education and Mandelbaum House, a residential college of the University of Sydney. Dr. Aafreedi is an Assistant Professor in the Department of History & Civilization at the Gautam Buddha University, Greater NOIDA

He starts his tour with a presentation on the “Indian Muslim Involvement with the Hebrew language” as part of a panel dedicated to the Asian Sub-Continent: India, at the 25th annual conference of the Australian Association for Jewish Studies on “Jewish Languages, Jewish Cultures: The Shaping of Jewish Civilization” on Sunday, 10th February at 2:30 p.m. at the Jewish Museum in Sydney. It is a prestigious conference exploring the profound place and importance of language in shaping Jewish culture in the past, present and future. During the conference Dr. Aafreedi would also chair the session focused on the Egyptian Jewish World.

He would draw the attention to the “Paradox of the Absence of Anti-Semitism and the Popularity of Hitler in India” in a lecture under the auspices of the Shalom Institute’s lecture series Network on Tuesday, 12th February at 12:30 p.m. at ABL Level 24, Chifley Tower, Sydney. The same day in the evening at 7:30 p.m. at the Mandelbaum House, 385 Abercrombie Street, Darlington, Sydney 2009, he would bring into sharp focus the “Jewish Contributions to Indian Cinema and Literature”. The very next day on Wednesday, 13th February, he will explore the “South Asian Muslim Attitudes towards Jews, Israel and Zionism” under the auspices of the Shalom Institute’s lecture series Encounters at Waverley Library, 32-48 Denison Street, Bondi Junction. In the evening that day, Dr. Aafreedi will deliver a lecture at the Sephardi synagogue at 7:30 p.m. on the “Tradition of Israelite Origin of Pathans”. Before leaving for the second leg of his lecture tour in Brisbane, he will speak on the interconnections between “India, Islam and Israel in the 21st century” under the auspices of Australia/Israel & Jewish Affairs Council. During his stay in Sydney, Dr. Aafreedi can be reached for a potential interview through Professor Suzanne Rutland of the University of Sydney, whose email address is suzanne.rutland@sydney.edu.au

In Brisbane, Dr. Aafreedi would give a lecture each on “South Asian Muslim Attitudes towards Jews, Israel and Zionism” at the Multi-Cultural Centre, Griffith University and the University of Queensland on Tuesday 19th February and Thursday 21st February respectively. He will be hosted in Brisbane by the Institute of Asian Studies.


Dr. Aafreedi is a well known orator whose lectures have been greatly appreciated in the US, the UK, Israel and India, and he has held fellowships at the Woolf Institute, Cambridge, UK, Tel Aviv University, Israel, and the Centre for Communication and Development Studies, Pune, India. He would be touring Australia as a Visiting Scholar of the University of Sydney. He has to his credit the first ever Holocaust films retrospective in South Asia, held in Lucknow, a major centre of Muslim scholarship, in India in 2009. He sits on the editorial board of the Journal of Indo-Judaic Studies, the International Advisory Board of Asian Jewish Life and is the Editor (International) of the English section of the online newspaper Weekly Press Pakistan.
PNP Canada
Posted by Dr. Navras Jaat Aafreedi at 09:55 1 comment: