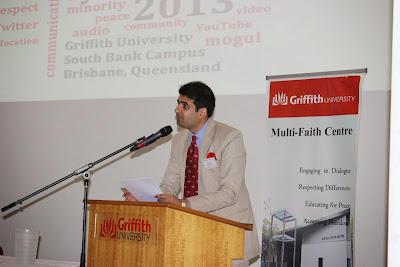 A DIRECTOR of a Griffith University Multi-Faith Centre believes Australia can make an important international statement on religious tolerance by engaging in meaningful dialogue with leaders of all faiths.

The International Religion Journalism Symposium provided students an open space for discussion and understanding of the events that happen in our community involving religious journalism.
Religion journalism has become an issue in today’s society as journalists are unable to capture the true nature of faith communities within their reporting.

Dr Navras Jaat Aafreedi, Assistant Professor at the School of Humanities & Social Sciences, Gautam Buddha University in India believes that the biggest issue lies with a generalisation of religions through a journalist’s lack of knowledge.

A key topic that Dr Aafreedi covered was the importance of accepting other religious beliefs and the need for the international community to understand the different traditions and issues within each faith community.

“It is as important to understand the beliefs of others as one’s [own] belief to be able to develop harmonious relations with people around us. It is the overly literal interpretations of the polemics in religious texts and the out of context readings of passages that lead us to misunderstand religions.”
Co-ordinator of The International Religion Journalism Symposium Casey Crocket went on to emphasise the importance of accurate reporting in religion journalism, mentioning the constant connection between faith and worldwide conflicts.

He believes that by holding events such as the symposium, an opening for further development in understanding varying religions’ and other similar issues will occur.

“Australia on the federal level has made a statement that inter-faith dialogue and issues of religion and challenges of that need to be better addressed in the media.  So, it’s a good opportunity for Australia to be seen as taking the lead in this, it’s an important statement.” he said.