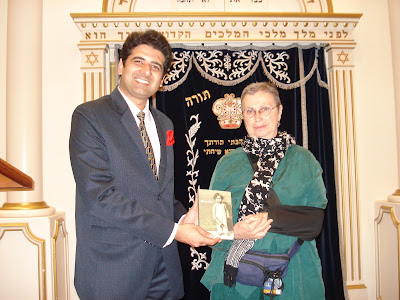 Weekly Press Pakistan, March 3, 2013
Renowned Indo-Judaic Studies Scholar and Jewish-Muslim Relations Activist, Dr. Navras Jaat Aafreedi, Assistant Professor of History & Civilization at Gautam Buddha University, Greater NOIDA, U.P., India, returned to India on February 25 after a fortnight long lecture tour of Australia as a Visiting Scholar of the School of Languages & Cultures, Faculty of Arts, University of Sydney, during which he spoke at four universities, an international conference, two organizations and a synagogue in two states in Australia, viz., New South Wales and Queensland. His tour was sponsored by the Fund for Jewish Higher Education.

Dr. Aafreedi started his tour in Sydney by presenting a paper on the “Indian Muslim Involvement with the Hebrew Language” as part of a panel dedicated to the Asian Sub-Continent: India, at the 25th annual conference of the Australian Association for Jewish Studies on “Jewish Languages, Jewish Cultures: The Shaping of Jewish Civilization” on February 10. He traced the history of Hebrew language teaching in India and highlighted the contributions of some Indian Muslims to the Hebrew language. It was a prestigious conference exploring the profound place and importance of language in shaping Jewish culture in the past, present and future. The next day at the conference, on February 11, Dr. Aafreedi chaired the session focused on the Egyptian Jewish World.

In a lecture he gave at the Shalom College of the University of New South Wales in Sydney under its lecture series Network on February 12, he drew attention to the “Paradox of the Absence of Anti-Semitism and the Popularity of Hitler in India”. He also pointed out the paradox that the biggest advocates in India of India’s closer ties with Israel, the Hindu right wingers, also happen to be admirers of the Nazis. He also asked for support in terms of books and films on the Holocaust in his efforts to create an awareness of the Shoah in India. The same day in the evening, at Mandelbaum House, a residential college of the University of Sydney which hosted Dr. Aafreedi during his entire stay in Sydney, he brought into sharp focus the Jewish contributions to Indian Cinema and Literature and also discussed their portrayal in them. He gave the same talk also under the auspices of the National Council of the Jewish Women of Australia (NCJWA) in Brisbane on February 18.

On February 13, Dr. Aafreedi explored the South Asian Muslim Attitudes towards, Jews, Israel and Zionism for a huge audience at a lecture he gave under the auspices of the lecture series Encounters of the Shalom College of the University of New South Wales in Sydney. He shared his knowledge and insights into the South Asian Muslim Attitudes towards Jews, Israel and Zionism also with Griffith University on February 19 and the University of Queensland on February 21 in Brisbane.  In a lecture Dr. Aafreedi gave on February 15 on “India, Islam and Israel in the 21st century”, under the auspices of Australia/Israel and Jewish Affairs Council in Sydney, and in a lecture he gave on February 20 on “Muslim-Jewish Relations in India” at the Institute of Asian Studies in Brisbane, he emphasized that South Asian Muslim perceptions of Jews are based on information gained from secondary sources and not as a result of direct contact with them because of their small numbers. Hence, the Muslims who are neighbours to them in the cities of Mumbai, Kolkata and Ahmedabad have a very cordial relationship with them, but most of the Muslims who know them only through secondary sources have bitter feelings against them. He called for support in his efforts to introduce Jewish Studies in India.

Among the many lectures that Dr. Aafreedi gave in Australia, he also delivered one on the “Tradition of Israelite Origin among the Pathans/Pashtuns”, the people he comes from, at the Sephardi synagogue in Sydney on February 13. He pointed out that unlike the other claimants of Israelite descent across the world the tradition was not a recent development among the Pashtuns/Pathans and that it finds mention in texts written by Jewish, Christian and Muslim scholars from the tenth century onwards. He also shared the results of the genetic studies of his own Pathan tribe, the Afridi, conducted in laboratories at University College London, UK and Haifa Technion, Israel, to ascertain its Israelite origin. In his last lecture in Australia, which he gave at the Institute of Asian Studies in Brisbane on February 23, Dr. Aafreedi spoke on the “Contribution of India’s Jews to Indian Arts and Letters”.

Dr. Aafreedi’s lectures were greatly appreciated by scholars as well as interfaith relations activists, both Jewish as well as Muslim, and also attracted diplomats, both Australian as well as from other countries.
Posted by Dr. Navras Jaat Aafreedi at 21:31 16 comments: