Gene travel: To Malihabad via Israel? 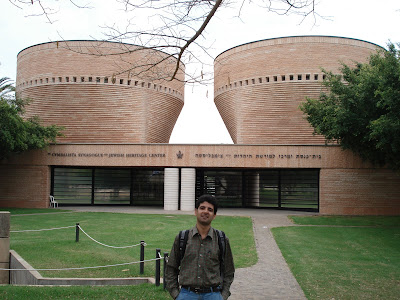 Ashish Tripathi, The Times of India, Lucknow, November 5, 2009
Shahnaz Ali, a senior research fellow at the National Institute of Immuno-Hematology, Mumbai, has been awarded a scholarship by the government of Israel for the academic year 2009-2010, to study the DNA of Afridi Pathans of Malihabad in Lucknow to confirm whether they are of Israelite origin or not.

Shahnaz Ali had collected blood samples of the Afridi Pathans of Malihabad in October 2008, when she was associated with the Central Forensic Science Laboratory, Kolkata. Now, with the scholarship in hand, she will conduct the analysis of the DNA at Technion - Israel Institute of Technology, Haifa. The study will be done under the supervision of scientist, Professor Karl Skorecki.

The theory of the Israelite origin of Afridi Pathans was brought into focus by Indo-Judaic studies scholar, Navras Jaat Aafreedi. He did his doctoral and post-doctoral research at the universities of Lucknow and Tel Aviv respectively. Shahnaz's genetic research would examine Navras's theory that Afridi Pathans are descendants of the lost Israelite tribe of Ephraim, which was exiled in 721 BC.

When contacted, Shahnaz expressed her pleasure at being selected for the scholarship. "The theory has been a matter of curiosity since long and now I hope a scientific analysis would provide us with some answers about the Israelite origin of Afridi Pathans. We still don't know what the truth is, but efforts will certainly give us a direction," said Shahnaz.

Navras, who himself is an Afridi Pathan, has been working on the hypothesis of the Israelite origin of Afridi Pathans since 2002. He invited Professor Tudor Parfitt and Yulia Egorova of SOAS, London University to collect mouth swabs of Afridi Pathans in November 2002. The swabs were analysed at the University College London by Neil Bradman and Mark Thomas, but the results were never made public.

Navras also welcomed the development. "It's a great news that now my research would be analysed scientifically. I don't know what would be the outcome of the DNA analysis, but it would provide us a direction to resolve the complex issue. I also hope that such effort will have positive ramifications and will bring the Muslims and Jews close and enable them to forget historical animosity," he said.

Navras was awarded PhD degree in 2005 by Lucknow University, on his research on Afridi Pathans based on religious and secular texts written by Jewish, Christian and Muslim scholars. Later, in June 2007, he did his post-doctoral research from the Graduate School of Historical Studies, Tel Aviv University, on the "Traditions of Israelite Descent among Certain Muslim Groups in India".

It was after navras presented his paper on Afridi Pathans in October 2007 at the 19th annual conference of the Midwest Jewish Studies Association, USA, he was contacted by Shahnaz, who wanted to scientifically analyse the findings.

In October 2008, Shahnaz, then a Senior Research Fellow at the Central Forensic Science Laboratory, Kokata, came to Malihabad in Lucknow and collected blood samples.

Navras said that as per history, ten Israelite tribes of the northern kingdom of Israel were exiled by the Assyrian invaders in 721 BC. It is believed that some descendants of these lost tribes settled in India between AD 1202 and AD 1761. Afridi Pathans of Malihabad are said to be one of them. Some Israeli academicians have visited Malihabad in the last few years to study customs and traditions of Pathans to find if they have any resemblance to Israelite traditions.
Posted by Dr. Navras Jaat Aafreedi at 18:42 308 comments: