Is Hitler loved in India? 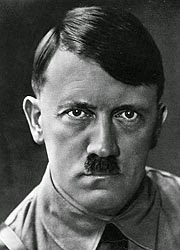 When Telangana chief minister K Chandrasekhar Rao labelled himself ‘Hitler’ (he reportedly lauded himself as ‘Hitler’ for thieves, the corrupt and ‘to stop injustice’ at a press conference) he was displaying a trademark Indian ambivalence towards Adolf Hitler- a man responsible for the death of six million European Jews and of millions of other non Aryans.

The Indian attitude to Hitler is on display every time the name is used for one who is little more than a strict disciplinarian- a popular case in point being comparisons of one’s mother-in-law to the mass murderer. At worse, it signifies a dictator and could thus be used as an adjective for that particularly harsh college principal. The name pops up in serials- there was one named ‘Hitler didi’ which drew flak in the west for stroking memories of a man universally reviled (see here and here) and in cinema- ‘Hero Hitler in Love’ was a 2011 Punjabi movie that received a bumper opening while the Mithun Chakraborty starrer ‘Hitler’ (1998) portrayed the protagonist as a man of staunch principles. A more recent cinematic outing- ‘Gandhi to Hitler’ (2011) was decried for painting the man as a lost hero of India’s struggle for Independence (see here) while Hitler memorabilia, including his autobiography Main Kampf, continues to grow in sales (see here). In 2006, a Mumbai restaurant was forced to change its name from the ill advised ‘Hitler’s Cross’ (see here) while in 2012, a clothing store named ‘Hitler’ in Ahemdabad drew considerable anger (tellingly the owner of the unfortunately named store said that he had picked the name in memory of his grandfather, a strict disciplinarian who the family referred to as ‘Hitler’).

Navras JaatAafreedi, Assistant Professor at the School of Humanities and Social Sciences, Gautam Buddha University (GBU), Greater NOIDA, puts down this offensive insensitivity to ignorance about Jews (of which there are just 5000 in India) and the blacking out of Holocaust studies in India. For the first Aafreedi gives the example of being handed a book on ‘juice’ when he asked for one on ‘Jews’, and for the latter he says, “Studying the Holocaust has far reaching repercussions. You would then have to study other genocides, for instance the anti Sikh riots of 1984 and Gujarat riots of 2002 among others”.

An Indo Judaic Studies researcher, Aafreedi’s efforts towards raising awareness on the Holocaust have included the country’s first ever Holocaust Films retrospectivein South Asia in 2009, with screenings at the University of Lucknow and Ambedkar University in Lucknow.  Yet he is driven to despair every time he asks his young students what they think of Hitler. “Not a single hand goes up when I ask who has a poor opinion of Hitler”, he says.

In 2012, Anuj Kharb, a Masters student of Development Studies at the GBU worked on a paper titled, “The parameters of popularity among Indian Youth” and discovered that Hitler scored high on patriotism, discipline, work ethics and leadership. This was not the case with other dictators like Mussolini who in fact had zero recall value to Kharb’s subjects. While Kharb admits to some knowledge of the Holocaust, he does not shy from justifying Hitler’s deeds. “Hitler wanted to be an artist. Yet when he joined the army and saw how Germany had been trampled over after World War I, he struck back. Love for the nation is above all other kinds of love. Today, other countries are trying to crush India. It is natural for the youth to want a leader who is dominating”, he explains.

Nathaniel Currier, who did a project on the rise of the popularity of Hitler, with particular reference to Tamil Nadu as part of the five week South India Term Abroad program in 2013, came back less fascinated than Kharb. As he writes in the opening pages of his study, comparing the resurgence of Jospeh Stalin’s popularity in India with the Indian Hitler fan club, “…political frustration is one of the biggest factors leading to Hitler’s Indian rise in popularity….. Hitler for them is a borrowed history. India can feel no “nostalgia” for Hitler’s reign like the people of Russia can for Stalin. Instead, there seems to exist a growing desire to adopt his legacy as their own; a desire spurred on by multiple factors and guided by an inclination by the youth to escape their own past, rather than feel nostalgic for it”.

As for Hitler’s admirers, Currier puts them in two categories- the first who admire him without any grounding in facts, the second who have read some History and base their liking on his perceived qualities as a strategist, management style and oratory skills. The concluding line of Curreir’s study is ominous: “Hitler’s rising popularity is more than a humorous oddity. It represents a shift in the collective consciousness of India’s youth that could potentially effect the direction of India itself”.

It is the admiration of the first category of fans that is most difficult to counter for it could flow from something as ephemeral as Hitler’s choice of the swastika as the symbol of his Nazi Party which is interpreted as great service to Hinduism. Writing in the April 2014 issue of Asian Jewish Life, Aafreedi (quoted earlier) delves into the admiration of the Hindu nationalists for Nazis and cautions against the “…propaganda unleashed by the Hindu Right, the Islamophobes in India. They continue to project Hitler as a hero with the aim of developing an acceptance for Nazi-like practices that they would like to adopt…”.

Old RSS hands however counter such contentions. Dharm Narayan Avasthi, the patron of the organisation’s education wing Bhartiya Shikshan Mandal, for instance, dubs it as “mere conjecture”.
Yulia Egorova, senior lecturer in Anthropology at Durham University who is the co-author of The Jews of Andhra Pradesh: Contesting Caste and Religion in South India says of the widespread ignorance of Hitler’s atrocities on Jews and a rise in Hitler’s popularity, “This is a worrying deterrent to India’s image as a tolerant country”.

It is a worry, no country with world ambitions, can ignore.