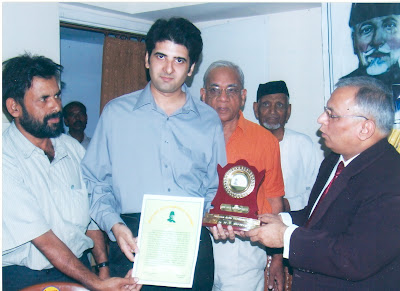 Dr. N. J. Aafreedi (centre) being felicitated by the Advocate General of the Indian state of Uttar Pradesh, Mr. S. M. A. Kazmi (right) and the General Secretary of the Maulana Azad Memorial Academy, Dr. A. Q. Hashmi (left) 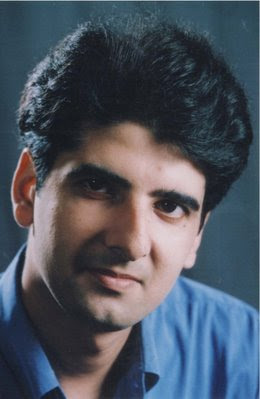 It gives Maulana Azad Memorial Academy immense pleasure to felicitate Dr. Navras Jaat Aafreedi for his remarkable contribution to Indo-Judaic Studies. The world's only serious researcher of Muslims of Israelite descent in India, he is the biggest contributor of research papers on Afridi Pathans. His e-book, titled The Indian Jewry and the Self-Professed 'Lost Tribes of Israel' in India, which embodies his doctoral (Ph.D.) thesis, is the first book to combine the study of the non-Jewish claimants of Israelite descent in India with that of the Indian Jews, and the third major work ever by a non-Jew on the lost tribes of Israel. Dr. Aafreedi is also the first writer to make any worthwhile contributions to Jewish Studies in the Urdu language. His writings have, in their own small way, helped to ease tensions between Jews and Muslims, who are sadly seen as natural adversaries today. The academy greatly appreciates Dr. Aafreedi's devotion to the task of getting Indo-Judaic Studies recognised as an academic discipline in universities, and wishes him all the best for his future endeavours.

I have found it on this website called [url=http://tipswift.com]tip swift[/url]. You can find it there.
cheers
edit: wrong thread,

Hello everybody, here every person is sharing
these familiarity, therefore it's fastidious to read this weblog, and I used to go to see this weblog daily.