Is Muslim clan the lost tribe of Ephraim? 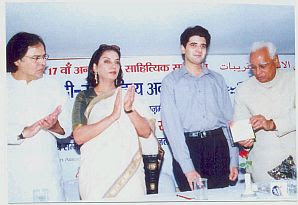 Dr. Navras Jaat Aafreedi (second from right) with Bollywood actors Farouk Sheikh and Shabana Azmi (left) and the Governor of the Indian state of Haryana, Dr. A. R. Kidwai (extreme right) at the release of his e-book, on June 12, 2006, at the International Literary Festival in Lucknow, India 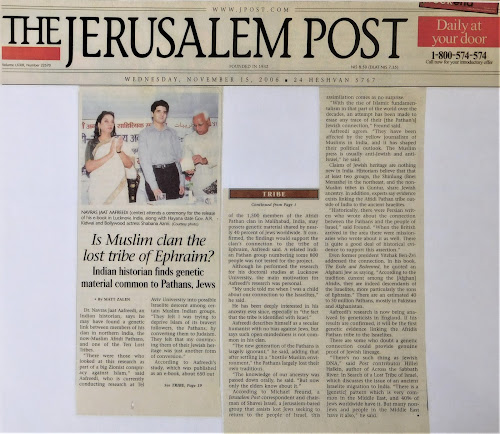 Dr. Navras Jaat Aafreedi, an Indian historian, says he may have found a genetic link between members of his clan in northern India, the now-Muslim Afridi Pathans, and one of the Ten Lost Tribes."

There were those who looked at this research as part of a big Zionist conspiracy against Islam," said Aafreedi, who is currently conducting research at Tel Aviv University into possible Israelite descent among certain Muslim Indian groups. "They felt I was trying to deprive Islam of its bravest followers, the Pathans, by converting them to Judaism. They felt that my convincing them of their Jewish heritage was just another form of conversion."

According to Aafreedi's study, which was published as an e-book, about 650 out of the 1,500 members of the Afridi Pathan clan in Malihabad, India, may possess genetic material shared by nearly 40 percent of Jews worldwide. If confirmed, the findings would support the clan's connection to the tribe of Ephraim, Aafreedi said. A related Indian Pathan group numbering some 800 people was not tested for the project.


Although he performed the research for his doctoral studies at Lucknow University, the main motivation for Aafreedi's research was personal."My uncle told me when I was a child about our connection to the Israelites," he said.


He has been deeply interested in his ancestry ever since, especially in "the fact that the tribe is identified with Israel."Aafreedi describes himself as a secular humanist with no bias against Jews, but says such open-mindedness is not common in his clan."The new generation of the Pathans is largely ignorant," he said, adding that after settling in a "hostile Muslim environment," the Pathans largely lost their own traditions."The knowledge of our ancestry was passed down orally, he said. "But now only the elders know about it."


According to Michael Freund, a Jerusalem Post correspondent and chairman of Shavei Israel, a Jerusalem-based group that assists lost Jews seeking to return to the people of Israel, this assimilation comes as no surprise."With the rise of Islamic fundamentalism in that part of the world over the decades, an attempt has been made to erase any trace of their [the Pathan's] Jewish connection," Freund said.


Aafreedi agrees. "They have been affected by the yellow journalism of Muslims in India, and it has shaped their political outlook. The Muslim press is usually anti-Jewish and anti-Israel," he said.Claims of Jewish heritage are nothing new in India. Historians believe that that at least two groups, the Shinlung (Bnei Menashe) in the northeast, and the non-Muslim tribes in Guntur, share Jewish ancestry. In addition, experts say evidence exists linking the Afridi Pathan tribe outside of India to the ancient Israelites."


Historically, there were Persian writers who wrote about the connection between the Pathans and the people of Israel," said Freund. "When the British arrived in the area there were missionaries who wrote about it as well. There is quite a good deal of historical evidence to support this assertion."Even former president Yitzhak Ben-Zvi addressed the connection. In his book, The Exile and Redeemed, he quoted an Afghani Jew as saying, "


According to the tradition current among the [Afghan] Afridis, they are indeed descendants of the Israelites, more particularly the sons of Ephraim." There are an estimated 40 to 50 million Pathans, mostly in Pakistan and Afghanistan.Aafreedi's research is now being analyzed by geneticists in England. If his results are confirmed, it will be the first genetic evidence linking the Afridis Pathan tribe to the Israelites.


There are some who doubt a genetic connection could provide genuine proof of Jewish lineage."There's no such thing as Jewish DNA," said Post contributor Hillel Halkin, author of Across the Sabbath River: In Search of a Lost Tribe of Israel, which discusses the issue of an ancient Israelite migration to India. "There is a [genetic] pattern which is very common in the Middle East, and 40% of Jews worldwide have it. But many non-Jews and people in the Middle East have it also," he said.•
Posted by Dr. Navras J. Aafreedi at 06:20

salam dear afridi! According to the DNA results "Y-Chromosomal DNA Variation in Pakistan" Pashtuns belong the indo-europan family.so there is no support for a Jewish origin. I would like to know to which haplogroup the afridis of indian belong?

הבלוג הזה הוא אוסף של מאמרים שהופיעו בעיתונות בשפות,ארצות ויבשות שונות על מחקרו של ד"ר נברס ג'אאט אאפרידי על יהודים הודים ויהודים מדרום אסיה שנחשבים על ידי עצמם או על ידי אחרים להיות צאצאים של שבטי ישראל האבוים
This blog is a collection of stories that have appeared in the press in different languages, countries and continents on Dr. Navras J. Aafreedi's research on Indian Jews and those in South Asia who consider themselves or are considered by others to be descendants of the Lost Tribes of Israel and his efforts to raise Holocaust awareness.